There has been something interesting going on at Benchmade Knife Co. I’ve said it a few times in recent reviews, but it’s worth highlighting here. They used to be the dusty old gun-shop knife brand. That’s not to say the old mini Griptillians were terrible, but just that I don’t think many people would have called them, “exciting.” Some of their newer designs from the last 2-3 years have been on a different level, and the Bailout is no exception. Buy the Benchmade Bailout at BladeHQ
Buy on Amazon

The Benchmade Bailout is the companion to their also newish released Bugout. Both knives share almost every trait apart from steel, blade shape, and their vaguely prepper-ish names. I like these knives, but I’ve always had an affinity for tantos, so I opted for the Bailout.

Before we get too far into the review, let’s touch on some general specs…

Before I get into the review too much, I want to address a potential elephant in the room. At the time of this review, there has just been a little scandal on Instagram regarding the Bailout. Apparently, an Instagram account had one of these blades Rockwell tested by a friend. The knife came back with a mid 50’s Rockwell when it is advertised at 60 HRC. I have no real perspective on this apart from saying this: A single independent source is not something to base an entire opinion on. If ten knives had been randomly and all found to be lower in HRC than advertised, when tested by a reliable source, I would take a little more heed.

/rantoff let’s get on with it.

The Benchmade Bailout is a tanto shaped blade made out of 3V steel. The blade is then finished with a slick grey Cerakote to protect from corrosion and give it that “high-speed-low-drag,” appeal. I’ve carried this knife in a lot of scenarios since first purchasing it. It was in my pocket when I built a fence around my house. It’s been in my pocket on river raft days. It’s also been with me whenever I’m doing something that I wouldn’t want to subject a custom knife to. In these contexts, it’s done a lot. I’ve split open Quik-crete bags with it, sharpened pencils, popped ties holding lumber together etc etc… It’s done all of these very well.

I’m not one to compare how something passed through a material or how many consecutive cardboard cuts it can do before failing. I am, however, someone that grabs for their pocket knife frequently and takes notice if it preforms the “real-world task,” the way I needed it to. The Bailout did this well, then stropped back to sharp easily. The 3V steel that Benchmade has selected is a favorite of mine. I often request it on my custom knife orders. It’s also one of the nicer steels to sharpen, in my experience. 3V will take a fine edge with minimal effort and retain it for a long, long time. That being said, it’s not stainless. 3V has 7.5% Chromium, so it’s “nearly” stainless much like D2.

From what I’ve seen if you keep your knives cleaned and maintained you’ll avoid any staining and pitting. In the specific case of the Bailout, Benchmade has coated the steel, so you’re only really going to see any stain issues on the edges.

The Bailout’s handle is made from textured Grivory, a polymer based material. The handle slabs are thin and skeletonized with a consistent matrix of pockets milled out to reduce weight but maintain strength. The slabs themselves are a svelte .12” thick. They feel good in the hand with enough grip that the knife feels secure but not so much that it begins to cause hot spots. Benchmade has flared the handle out near the pivot to reduce the possibility that you’ll slip onto the blade if you use it for a piercing task. This flaring also acts as a bit of a thumb ramp for me. Moving to the back, we have an aluminum pommel. I suppose the idea behind this is for some last-ditch striking application. I would love to have seen hardened steel used instead, but I imagine it came down to a weight/strength type scenario. The clip is excellent. It’s a short (in length) deep carry clip. It tucks right into the palm of your hand when you’re holding the knife and carry nice and deep in the pocket. I would love to see more makers take up the shorter clips instead of making them half the length of the knife itself. That being said, it’s a tight clip, so if you have thicker pockets, you may run into an issue getting it clipped on. And speaking of pockets, the Bailout carries easily. At just over 2 ounces, this is a knife you will quickly forget you are carrying until you need it. The Bailout isn’t quite as discreet as the Bugout, as it has a has that slotted protruding pommel, but everything is blacked out for a low profile. Here is a picture of it in the pocket: No complaints in the carry department.

The Bailout utilizes dual thumb studs and phosphor bronze washers to get the blade open. This is standard fare for Benchmade, and much like their other knives, the blade deploys smoothly and easily. Ahh, the axis lock. I’ve talked about it before in previous reviews, but suffice to say I’m a fan. I like it when watch companies incorporate mechanisms that are ambidextrous. It opens the doors for left-handed users as well as potentials users that want to carry weak side. The Axis lock itself is pretty great. It operates by moving a hardened steel bar along the curved tang of the blade until it reaches the open position. Once it does two springs, snap it in place blocking the knife from closing. The bar itself extends across the length of the knife’s handle allowing you to open it from either side, thus ambidextrous. The Axis lock has been historically proven to be a reliable and robust locking method for a good portion of Benchmade’s catalog.

For the sake of argument, let’s look at some competitive options:

We have the Spyderco Para 3 Lightweight, priced around $40 less than the Bailout. Same FRN style handles, somewhat ambidextrous compression lock, but the steel is where you’re making a compromise. The Para 3 uses CTS-BD1N, which is new to me, but it seems like it wouldn’t outperform 3V. Or we could look at Zero Tolerance 0450. I like this knife, but it costs roughly $40 more than the Bailout, and due to the Titanium construction will weigh significantly more. That’s not necessarily a bad thing, but the Bailout is trying to fill a specific need in a folding knife. I doubt the 0450 would be a knife you’d literally throw in a Bailout (or Bugout) bag due primarily to weight and cost.

When I opened this review, I touched on the fact that Benchmade has been creating some incredibly fresh and cool designs that fit a little better into the landscape of 2019’s knife collecting. The Bailout (and it’s Bugout twin sibling) are perfect examples of this. Benchmade has taken tried and true materials and molded them into a configuration that the EDC community values greatly. It’s thin, light, and durable. Benchmade has selected top-tier steel that will take a beating and keep on cutting. On top of all of this, the knife looks cool! The Cerakoted blade with an aggressive tanto tip is primed and ready for some Instagram pocket-dump cred.

The best part, however, is the price: Currently, BladeHQ has the Bailout priced at $144.50. That’s a lot of value for your money in my opinion. 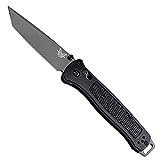 Editor: I recommend purchasing the Benchmade Bailout from Amazon or BladeHQ. Thanks for reading.