Last Updated: August 7, 2019
It has been decided – I am a total sucker for a cool “gentleman’s tactical folder.” I remember first drooling over the 890 Torrent when it came out in 2009. Flash forward a couple years, and today I am the proud owner of my very own Torrent, a sleek Steigerwalt design made by Benchmade.

Buy the Benchmade Torrent from BladeHQ

As I said before, I am calling this one a “gentleman’s tactical folder.” In many ways this one reminds me of the Mcusta Tactility. It’s an elegant knife, and while I’m sure it could work well in a defensive role, this knife is just too pretty to really use and abuse. Also the build quality, while solid, simply isn’t meant for hard use tasks. I have no doubt this would hold up as an EDC blade, but as you will learn in my review – I don’t recommend this one as an all out tactical knife or hard use folder. Lets take a closer look to see what I am talking about.

The Torrent has an overall length of 8.2″ a 3.6″ blade and it weighs 3.5 ounces. At this size the Torrent is light enough to EDC but large enough to be wielded as a tactical (emergency defensive) tool.

Part of the reason why this knife is so light weight is because of the thin blade and liners. Benchmade says the blade is 1/10″ thick. Now I’m not complaining, the blade seems adequately thick for EDC, but I would be concerned about really testing the tip with repeated stabs and thrust cuts. Adding to the thin appearance is the swedge running the length of the drop point blade, and the thin flat grind. It’s a beautiful look but it doesn’t exactly inspire confidence when it comes to tip strength. The knife has been given Benchmade’s “satin finish” which appears to have a very light stonewash upon closer inspection. All in all it’s a really handsome blade with a good amount of functionality.

Benchmade went with 154CM for blade steel, a very common choice for their knives. Personally, I’m a big fan of 154CM for it’s ability to sharpen easily, hold an edge, and to resist rust and corrosion. A good all-around steel, and hardened to between 58-61HRC, 154CM will accomplish most cutting tasks with ease.

The handles on the 890 Torrent are smooth G10 and they cover full stainless steel liners. The G10 has a very attractive finish that resembles wood grain. It’s very similar to the finish on the scales of the Benchmade Onslaught and Deja Voo. The steel liners have not been skeletonized, but to me that isn’t a big deal since the knife only weighs 3.6 ounces. Everything has been bolted together and there is an aluminum backspacer doubling as a glass breaker (or “non lethal” option). Ergonomics on the 890 are fairly unremarkable. Don’t get me wrong, this handle is plenty big and comfortable, but there isn’t much in the way of a finger choil and there is no thumb ramp or jimping to speak of. Considering the overall build of this knife I’m not disappointed. Again, I see this as more of a gentleman’s folder with a tactical flair rather than an all out purpose-built tool. The G10 is smooth, but it isn’t slippery. The handle works well enough in forward and reverse grips, although I feel that some jimping on the spine wouldn’t hurt. The pocket clip is a sturdy piece of folded over stainless steel. It has been attractively finished and is set up for a nice deep carry. However, this is a right side tip down carry only. The absence of an ambidextrous clip is something of a deal breaker for for me since I am left handed. However, I actually like tip down carry with this knife because this is an assisted opening knife and it has a very light trigger. Carrying the Torrent tip up without an external safety would be an accident waiting to happen.

The Torrent is an assisted opening knife and features Benchmade’s Nitrous Assist technology. This is my first real experience with a Benchmade assisted opener, and I was pleased with how fast and hard this knife fired. I was less pleased with the right side only thumb stud – again, it really limits my ability to carry this one. That said, the large thumb stud was easy to get at and I had no problem brushing this blade open with my fingers. The “trigger” is very light on this knife which makes it very easy to deploy. There is no external safety and I would not feel comfortable carrying this one tip up.

To be perfectly honest, while I generally like spring assist knives I don’t think the Torrent needs to be spring assisted. If it was built heavier as a real folding tactical knife then the Nitrous assist would be more appropriate, but for a gentleman’s knife I think it’s overkill. The Torrent makes use of a liner lock and I found mine to engage nice and early with no blade play. That said, this looks to me like a thin lock and there isn’t much spring tension holding it in place. I found that the lock disengaged without much effort. I would seriously think twice before engaging in any kind of serious cutting tasks with this one. I don’t think it’s at the point where the knife is unsafe, but I don’t have as much confidence in it as with other liner locks. Of course, you want to be extremely careful with any folding knife – I just found lockup on the Torrent to be a little sketchier than I’m used to.

I found myself immediately attracted to the 890 Torrent. The blade is a classic shape, lean and beautifully finished. The handles are simple, and flow gracefully with the lines of the blade. The fit and finish is top notch and I love the details like the jimped backspacer and polished pocket clip.

Where the Torrent let me down was on the practicality of it. First of all, a right side only thumb stud and pocket clip is not going to work for me – that goes without saying. But more concerning was the overall light build of this knife. The blade steel is thin, as are the liners. The ergonomics are not aggressive and the lock seems very easy to disengage. While it’s a beautiful knife I really can’t recommend it for serious work. In my mind this one is ideally situated for the collector, or someone looking for an EDC knife with some tactical inspiration, a “gentleman’s tactical folder” if you will.

Despite my gripes I’m still walking away liking the Torrent a lot. I know I may have been fairly critical with this one, but there is still a lot to like. This is great blade for the collection and I did enjoy carrying it despite it’s shortcomings – I just want to make sure that if you are interested in the knife, you are interested for the right reasons. 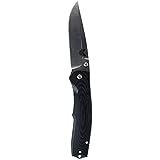 I recommend purchasing the Benchmade Torrent from Amazon or BladeHQ. Thanks for checking out the review.