Last Updated: August 3, 2019
The original Benchmade Bedlam 8600 is an automatic knife released in early 2010. The knife received rave reviews across the community and this large, middle eastern inspired knife was quickly deemed to be a new Benchmade classic. However, the knife was only available as an automatic, which is totally sweet, yet not particularly practical because large automatic knives are illegal in lots of places without a military or police exception (plus there is just more stuff to break with an automatic knife). Buy the Benchmade Bedlam at BladeHQ

Thankfully, Benchmade understood that this knife was meant for the masses, and they recently released a non-automatic version, the Bedlam 860 that you see here. The 860 is very similar to the 8600. It’s a large blade that could be used defensively, but will probably be a collector’s item more than anything. Lets take a closer look at what makes the new Bedlam 860 tick.

The Bedlam is a very big folding knife with a 3.95″ blade, an overall length of 9.71″ and a weight of 7.1 ounces. I know some guys have been talking about using the blade as an EDC, but the length and weight doesn’t make it practical to me. I find it more to be built as a self defense tool. The kind of specialty blade used by martial artists. Of course you could use this for whatever you want – as a collector I found it to be immensely appealing and have carried it as well.

The blade shape of this knife is very cool, and really distinct. People commonly refer to it as a trailing point blade or even a “Persian” style blade. While both of those names are accurate, in it’s place of origin this style of blade is commonly referred to as a “Jambiya”. The Jambiya is a traditional style of knife found in a lot of Middle Eastern countries. Jambiyas are also used as official Combat Knives for the country of Jordan, and it is rumored that the 860 was originally designed for the Prince of Jordan’s royal guard. At any rate, the Bedlam has a large upswept blade with a thin swedge running along the top part of the blade and a hollow grind starting from about 3/4 of the way up. This is a nasty looking knife with plenty of attitude. If you study the tip you will notice that it is designed so that the last few millimeters of steel actually thickens as it reaches the very tip. This is known as a revere distal taper and provides extra strength for thrust cuts and stabbing. Even with the tapering it’s still a fairly delicate tip so I wouldn’t use it to pull nails or stab through cinder blocks.

The steel is 154CM which I have covered in a couple of my other Benchmade reviews. Suffice to say 154CM is a great all-around steel and was an excellent choice for the Bedlam. It sharpens easily, holds a great edge and is resistant to wear and corrosion. The entire blade is hit with Benchmade’s proprietary BK1 matte black coating. BK1 is a tough scratch resistant finish that is very resistant to corrosion. You also have the option of getting the knife in a plain (uncoated) satin finish. To me the knife looks a little naked without the coating, but it’s all a matter of personal preference.

The handle of this knife is made of 2 large pieces of sculpted G10 over full stainless steel liners. The G10 scales are wonderfully sculpted and have been given an interesting tiger stripe like pattern. Underneath the liners (along with the rest of the hardware) has been given a flat black finish. The liners are partially milled out to reduce weight and place the balance point right in the middle of the second choil. There is a partial backspacer made of some sort of resin, and a stainless steel pommel that could serve as a glass-breaker or non-lethal impact device. The handle is screwed together so you could take it apart for cleaning and maintenance. Everything is secure, well aligned and totally flush. From an ergonomics standpoint, the 860 is quite nice. You would expect a knife of this size to feel good in hand and the Bedlam does not disappoint. What interested me is the variety of grips. the two choils allow you to either choke up or sit back on the knife and really extend your reach. There is a good amount of jiming on the thumb ramp, first choil, and the pommel so the knife feels very secure. The G10 has a low to medium amount of traction to it, but given the overall size of the knife and it’s handle features, I feel very comfortable wielding this blade. The pocket clip is given a black finish and allows for reversible tip up carry. It’s a pretty deep carry, but not super deep. Clip retention is fairly weak, which makes it easy to insert and retrieve from the pocket, but it also increases the chance of the knife falling out. It’s a delicate balance, but I do like the ease of retrieval.

As far as overall carry goes, this is a large 7 ounce knife, so you would expect to notice it. I actually found the Bedlam to carry well, and liken it to a larger tactical flashlight. Compared with the other big knives I’ve carried (like the Cold Steel Spartan and ZT 0300) the Bedlam carried very well.

While the deployment of the 860 Bedlam isn’t as fast as the 8600 Bedlam, it is still very good. The big black blade really sings with just a flick of a thumb stud and it locks in place with authority. The ambidextrous thumb studs are big and easy to get at. There are phosphor bronze washers in this knife, so you can expect a nice smooth deployment every single time. The axis lock is the same used in the 8600, and it was a great choice for the 860. This is a strong lock that is easy to use with one hand and is fully ambidextrous. At first, I noticed zero blade play with this knife – everything was very snug as you would expect from a Benchmade. Over time I found that the pivot loosened up a little and I started to experience some side-to-side blade play. This is pretty normal for a lot of folding knives (and not the first time this has happened with an axis-lock blade). What I did was apply some blue lock-tite to the pivot screw. This fixed the problem completely and I haven’t had issue with blade play since.

What can I say? If you are all into the Bedlam then I am here to confirm that this is a sweet knife. A big, USA made knife with rock solid construction, great materials and it looks really cool. There is a lot to like with the Bedlam. The real question is whether this is something you can get away with carrying. For some I know this will mostly be a novelty or collectible. Others might buy it with an eye towards use as a utility and self defense blade.

If you like the looks and have room in your collection, then the Bedlam is a well made knife worthy of your consideration. 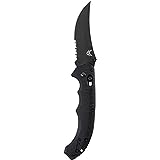 I recommend purchasing the Bedlam at Amazon or BladeHQ.